The caves of the name meaning Big Rock are noted by many writers. Smith, in 1749, says that near Carrigtwohill, to the north-east, is a large cavity under a rock a long way into the earth. Lewis, in 1837, says that in various parts of the parish of Carrigtwohill, are caverns which penetrate for a considerable distance into the limestone rocks, and in some of them are very large and beautiful stalactites. 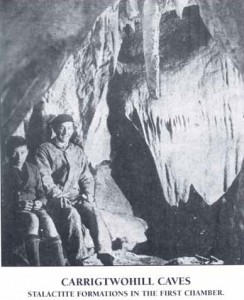 Mr. J.C. Coleman and others visited Carrigtwohill on the 17th of September 1933 for the purpose of examining a cave in the vicinity mentioned in Smith’s History of Cork 1750. This they discovered in a prominent knoll of limestone known locally as the Rock.

Finding an opening, they entered, by a sloping bank of quarry debris, a chamber thirty-two feet long with an average height of about ten feet, with a short low passage on the left which proved to be a cul-de-sac. Opposite the entrance, the chamber closed to a stalagmited fissure. At one time this was considerably longer, but was reduced due to quarrying operations. They discovered a boulder blocked fissure which had been exposed by blasting. On removal of some of the boulders, a large sloping passage was exposed. This entrance dropped twenty feet inside; and, descending the steep clay slope by means of a rope they found themselves in a large passage. About thirty-four feet from the entrance this closed to an impenetratable fissure. On the left was a low passage with a floor of partly died mud. Heavy deposits of stalagmite made this very narrow, and portions had to be broken off in order to continue.

A tunnel, twenty-two feet long and four feet wide, with an average height of fourteen inches had to be crawled through. The original gallery was completely blocked by large deposits of stalagmite, and this tunnel was formed when the clay and sand which comprised the old cave floor were washed away by waters which formerly ran through the cavern.

Leaving this, the passage increases in height until a water pool was reached. Here, a small pool of water, held in by a “gour” was situated on a stalagmite shelf. Over the pool was a chimney which gave access to a high level chamber. On the left was a large gallery over sixty feet long which brought them in the directionof the old cave.
Another hall was nearly sixty feet long, and attained, in places, a height of twenty feet. Towards its western end the height rapidly decreased, and portion of the stalagmite floor had been washed away. It was adorned by various forms of stalactites, stalagmites and curtains, and presented a most impressive and beautiful appearance. On the east side a very narrow fissure led into yet another chamber. This cavern was, at one time, seemingly, much larger, but rock falls, especially on the southern side, had considerably encroached on its size. The top boulders were cemented together by stalagmite, and as usual in such formations presented fantastic shapes of natural objects.

Subsequent exploration brought to light many more passages and chambers, one fifty feet long and averaging ten feet high. The members of the Cork Speleological Society did much work in exploring and mapping the Big Rock caves.

Anyone who has been into the caves, and has seen the stalactites hanging from the roof with tiny drops of calcium-impregnated water dropping from their points to form stalagmites on the floor must have marvelled at the countless number of years which have passed before these formations attained any great size. For, in a thousand years, one inch is added to a stalactite; during the same period, the water charged, with carbonate calcium, may have formed a thin streak of light-tinted stalagmite. During the next thousand years the water may have found and passed trough a bed of colouring matter which has added a streak of another colour, and so, very very slowly the one takes on the form and beauty that is to be found in the Carrigtwohill Caves.