You are here: Home / History / Churches 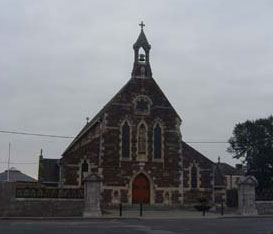 ST. MARY’S CHURCH, CARRIGTWOHILL
The present Catholic Church, St. Mary’s , was built about 1869 and of local sandstone. Over the doorway, leading to the nave is the inscription “Do Dhai fo Thearmuin Muire Naomhtha”. The tablet bearing this inscription must have come from the earlier church which must have been on or near the same site.

This earlier church had been designed by the well known Fr. Matt Horgan, while he was curate in Carrigtwohill. Windele, who was at Mass in Carrigtwohill on Palm Sunday, 1833, described the people as bringing each one his own branch of palm and holding it up in his hand to be blessed.

A stone on the outside of the East wall of the present church, directly over the High Alter commemorates the memory of Thomas Forrest Esq., donor in perpetuity of the enclosure in which this church is built and is dated 1816. this was taken, evidently from the old church on the same site and built about 1812.

It was Fr. Seymour who built this church. In 1969, the Very Rev. J. Canon Ahern, did some renovating in the interior of the church. These renovations were carried out by Ellis and Co. The altar and sanctuary were adjusted to Vatican II requirements. A block floor replaced the old slab floor. The whole church was re-wired and painted.

The following is an extract from the Cork Examiner on the occasion of the consecration of the new alter:
“ Centenary celebrations marked by new alter”. The alter of St. Mary’s Church, Carrigtwohill, Co. Cork, was consecrated yesterday, the ceremonies being of an unusually impressive character. It was also a historical and memorable occasion, for exactly 100 years ago on the same spot, this church was honoured with the rarely performed ceremony of a full consecration.

St. Mary’s was built 100 years ago to the day in the Gothic style, from a design furnished by Mr. Ashlin, a Dublin architect, and the execution of the work reflects the greatest credit on the builder, Mr. Newstead of Fermoy.

The town of Carrigtwohill has in its little Church a gem of architecture, a building which testifies to the piety and charity of those who aided in its erection.

The preservation of God’s honour in the material templt passed through a renaissance period” yesterday evening. The new alter facing the people for the new rite of the Mass was officially consecrated by the Bishop of Cloyne, Most Rev. Dr. J. Aherne. The entire parochial congregation attended the centenary celebrations.

ST. DAVID’S CHURCH, CARRIGTWOHILL
Nearby, adjoining the village are the ruins of a Franciscan Abbey, founded and endowed by the Barry Family of Barryscourt, one of its towers still serves as a steeple for the present protestant church.

There are several detached parts of the buildings remaining but they are rapidly falling to decay. This church was called St. David’s by the Barrys as General de Barry was Archdeacon of St. David’s in Wales.

Towards the middle of the 16th century Henry VIII suppressed all the monasteries and churches. It was during the awful Desmond Rebellion that the churches of the district were destroyed. This district being over-run by Raleigh and his forces, it would be too much to assume that the great Church of Carrigtwohill escaped destruction but it is likely after the suppression of the Rebellion in 1582, that Lord David Barry rebuilt the churches. (Lord David Barry died in 1617 and his successor opted the Protestant religion)

During the many encounters which took place in these parts in 1645 the great church of Carrigtwohill was burned by the Cromwellian leader – Murrogh O’ Brien better known as “Murrogh of the Burnings”. Part of the ruins were roofed over a short time afterwards as a Protestant church and the old tower served as a steeple, and the chancel arch is transformed into an east window. From the occurance of two arches in the side walls of the nave, it looks as if the church had a tranceptof trancepts or perhaps aisles. The total length of the church was 150 feet.

Surrounding the ruin is a large cemetery where there are many grave monuments of interest. The most important is, doubtless, the rather elaborately carved tablet which is set into the surviving fragment of the north side walls of the nave. It’’s inscription reads : “ This monument was erected by Sir James Cotter, Kt., for himself and his family. Anno Domini, 1688”.

From early 1990 the members of the Community Council have been involved in cleaning up the old Graveyard which had been overgrown and neglected for many years.

The Council in co-operation with Cork County Council, The Church Of Ireland, the Historical Society and many other interested in the project came together and eventually a team of workers started the clearing of the wilderness, straightening headstones, layout out new paths and lawns until finally it took shape into what it is today. The work of the old Graveyard Committee is ongoing, volunteers even those with no family connections there, keep the place in order all year round and the combined contribution of everyone is very much appreciated.