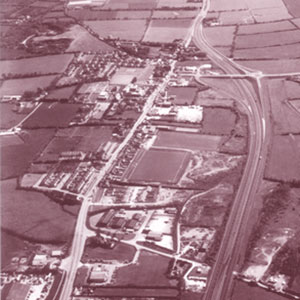 Smith, in his map printed in 1750, shows three main roads running through Carrigtwohill parish. One was the main road to Cork and Midleton; another from the village to the castle; and thence to the sea at Barryscourt. This was the ancient route to Cobh, when in those days, a traveller to Cobh went first down the Well Lane along the Clae Ramhar, known as the Clear-out or route past the castle, and thence the laneway along by the sandpits and Long Grove. From Goilin Creige he entered Fota, and crossed the slob by stepping stones at low tide at Belvelly. Goilin Creige, which just opposite the Dog’s Lodges, means in English “Little Sea Inlet on a Barren Spot”.

The present roadway to Cobh was opened about 1807, the year Belvelly and Slatty Bridges were erected. Later Slatty was converted to a sluice, and the existing sloblands between it and Carrigtwohill village reclaimed.

The third road shown on Smith’s map is from near Midleton on towards Mallow, and this same highway goes through Heamount and Woodstock, anciently know as the Bothar Bo Finne from the reputed legendary White Cow. According to George Atkinson of Cobh, the road behind Ballyvodock Castle was alos know as Bothar Bo Finne, in English – Road of the White Cow.

The Youghal railway was opened in 1862 to a terminus at Summerhill in Cork City.

In Irish folklore there are many tellings of this legendary White Cow. On a May eve, three cows came in from the sea at Ballycroneen Bay in Imokilly. One cow was coloured white, another red, and the third black. The three separated after travelling about a mile inland; the red one went to the west by a road going all round Ireland; the black cow went northwards through Lismore and on to Waterford. But the white cow came by Castlemartyr, Saleen, Cloyne, and on by Ballyvodock, and took a drink at a small lake in front of Fota House. After this, the lake was known as Loc ns Bo, The Lake of the Cow. This little lake has since been filled in. next, this enchanted cow is located in Ballinakilla, and, as she lay down to rest, she left her knee-prints on a piece of rock. Ever since, this spot is called Leaba Bo Bainne, The Bed of the Cow of Milk. For each day, she had a drink from the well at Woodstock House where an old woman milked her, and no matter how big the vessel, the cow always filled it. To this day, this well is known as Tobar Bo Finne, Well of the White, or Fair Cow. The yield of milk was so copious that this mischievous and irreverent woman, like all women, became so curious that, on this particular day, she continued milking the poor cow into a sieve; and just as the blood came, the cow, giving three roars, jumped into the air and was never seen in Carrigtwohill since. It was said that she was afterwards seen grazing in the rich pastures of Co. Limerick called the Golden Vale.

In the time where there was no bridge at Fontarabia and the road from Carrigtwohill to Cork passed by Mayfield and down the Old Youghal Road; the old Mail Coach Road, Cork to Tallow, came along Ballynoe, through Boitrin Dorca, across Carrigane, and up the boreen that passes Barrys in The Wood, then below Ballyedmond an out through Connery’s Boreen; the coach horses now well mud-splattered to their bellies.

At this time, a ferry boat was working between the Great Island and Barryscourt.