You are here: Home / History / Monuments in Carrigtwohill

he memory of William Bransfield :

Colonel Sir Hamar Greenwood, The Chief Secretary for Ireland answered a question in the House of Commons on May 24th 1921  as follows:)

William Bransfield, a railway employé, residing at Carrigtwohill, and a brother-in-law of an ex-soldier who was shot in the same village three weeks ago, was 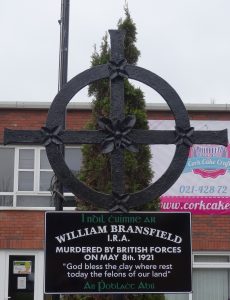 taken from his house (which stood near the Curate’s house and since demolished) and shot dead in the road in the early morning. The only other occupant of the house at the time of this outrage was the murdered man’s mother, who is deaf and mentally feeble, and the police have so far been unable to obtain any reliable information which would lead to the detection of the murderers. 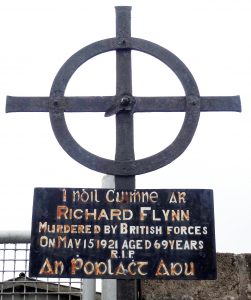 n elderly man, who had no connection with the Movement, was shot outside his house beside the new Boys’ School on May 15th 1921.
On the same night his son, who was dumb, was also taken out and wounded, but managed to crawl into Nagle’s shed where he his until the enemy had gone.