You are here: Home / History / Pastimes and Customs 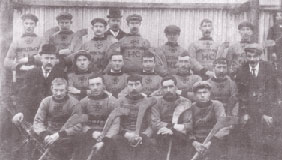 Hurling and football, before the formation in 1884 of the G.A.A., was played uin Carrigtwohill. The game at that time was played across country; usually the ball was placed on the boundary between 2 parishes with no referee or goalposts and the game ended when darkness fell. Then the teams numbered 20 a side and slogged at a very large ball, but big men were in Carrig in those days, and the ground shook beneath them. At practice, the doctor ran out of thread, wounds were so frequent. Records are available of many rough and tumble matches being held at Leamlara & Dundellerick.

On the Barryscourt Road, on Ludgate’s land, there was a racecource; the race-stand was on its highest point; no ditches or fences were there then, the only fenced-in portion being at Murty’s Cross Corner, the property of Fouhy’s of Barryscourt. The racecourse went, and a hurling field, known as the enclosure, came into existence on this same spot. High trees then lined the roadway, where on their leafy branches, men found a free grandstand view when matches were in progress. It was known as the “enclosure” because it was enclosed by corrugated iron, and had two dressing rooms. A day came when the corrugated iron was pulled down, each shareholder got his share of it. A convoy of about twenty sidecars ws the usual match outing to leave the village, around 1918.

Rounders, one of the oldest of Irish games, was at one time, a great pastime in the parish. Two teams would line out; the striker hit out the ball with a bat – his comrades then ran to fixed stops, places round in a circle trying in turn to get home. The opposing team would knock a man out if they succeeded in hitting him with the ball between two stops. On a hard frosty moonlight night, in those years, it was the usual sight to see a long line of grown –up men at the game of leap-frog up and down the village street. They also played “bum-barrel” and “donkey-go”, “quates”, “four-corner-fool”, “duck in the granny”, and “blink man’s buff”. The mulling of porter by stabbing a red-hot poker into it had also ceased. Crowds of men congregated at the cross midway in the village, at O’ Connell’s Cross, Mary Ann’s Corner, Anngrove Cross, Slatty and Murty’s Cross.

A story goes that, in ancient days, the smoke from a pagan fire was blinding the Christians, so a saint told the Christians to make a fire with a bone in it, and to repeat prayers. This rendered the fire of the pagans powerless, and this is how the term “bonfire” originated. On Bonfire Night, St. John’s Eve, cows would be driven through the bonfire, as it was believed that this custom increased their milk yield. Partly-burned sticks from the bonfire would be thrown into potato gardens and crop-fields for luck, prayers being said. Over the bonfire the sign of the cross was made with a plant called “magould”. This plant would then be kept in the dwelling-house until Bonfire Night came around again. There was a cure in this plant when the sore eyes of lambs were blessed with it.

On St. Bridget’s Eve, girls carrying a cloth image of the Saint called the Brideog went from house to house, collecting pennies. In honour of St. Bridget, also, rushes were plaited into a cross called the Boga Bride, St. Bridget’s Cross. This was then hung on the rafters until next St. Bridget’s Eve when a new one would be made. St. Bridget’s Cross originated from the story of Bridgid being at the bedside of a dying pagan chieftan. She picked up some rushes from the floor and began to weave them into a cross. He watched her, and asked her what she was doing and she began to tell him the gospel story. Before he died, he was converted and baptised.

Another old custom, said to cure a pain in the head, was the putting-out of a rag or piece of cloth on St. Bridget’s Eve.

On Skellig Night, with blackened faces, men went out to celebrate the custom of “taking to Skellig” any marriageable female found out of doors on this night. Surrounding her with a rope, she was pulled about before she was finally released. A rag-made image of a man would be placed on the chimney-top or outside the door of an old maid. This custom originated from the match-making ceremonies held at pilgrimages near the Rock of Skellig in Kerry. A match made in the north-eastern portion of the parish had many verses composed about it. The following few lines were taken from it :-
“Young Will and Joan are very well known,
For trotting very often
Up the lane, to the fair-haired dame,
Old Kearns for to softe;
He gave the hill with all his will,
But Joan want the field below,
Dead or alive, old Kearns swore
He’d never let it go”.

At midnight on New Year’s Eve, a lump of bread, usually stale, was beaten against the kitchen door in the custom of “beating out the hunger”.