Fota Wildlife Park has over 90 species of animals on 70 acres of open countryside. These species are able to adjust to the Irish Climate. The animals themselves make the choice of seeking shelter when necessary. In some cases, for example the giraffes, only a barrier separates visitors from the animals but this is always unobtrusive and does not reduce the animals’ quality of life.

Fota Wildlife Park was opened in 1983 by the President of Ireland, Dr. Patrick Hillery, and is a joint project of the Zoological Society of Ireland and University College Cork. Fota Wildlife Park Ltd. is a non-profit organisation limited by guarantee, and is a registered charity. Any financial surpluses that the Park generates are reinvested in order to promote the company’s objectives of conservation, education and research.

In 1979, the late Dr. Terry Murphy, Director of Dublin Zoo, proposed to the Society’s Council that, as Dublin Zoo had reached maximum development in the space available, they should establish a wildlife park and that it should be quite different in concept from a conventional zoo or safari park. The Council accepted the proposal as a project to mark its 150th Anniversary, and started to view sites in the Leinster area. 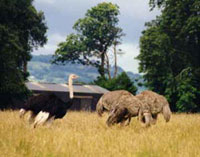 Prof. Tom Raftery, Vice-President of University College Cork and Director of Fota Estate (which the College had bought in 1975) became aware of the Society’s plans. He contacted Dr. Murphy and suggested that the wildlife park be located at Fota. Shortly afterwards, a delegation of Council members visited the proposed site. Amongst the visitors was Prof. John Carroll, a former President of the Society, who informed the group that he was born and reared in Fota and went to school in the small schoolhouse on the estate.

Subsequently, Prof. Raftery brought the proposal before the Governing Body of UCC where it received almost unanimous support. Likewise the proposal was well received by the Society’s Council. At a meeting in December, 1979 it was formally agreed that the Society would establish a wildlife park on 70 acres at Fota which UCC kindly offered free of charge under licence agreement. Fundraising committees were set up in Dublin and Cork, chaired by Prof. John Carroll and Mr. Clayton Love Jnr. respectively. All the funds for the development were raised from public subscriptions, apart from a grant from Bord Fáilte for the perimeter fence.

The Society’s Council accepted Dr. Murphy’s concept and design of open, natural surroundings for the animals, with no obvious barriers. During 1980 and 1981, the late Mr. Sean O’Donovan, Lecturer and Farms Manager with UCC, supervised the task of clearing the dense undergrowth, draining the swamp to form the lake with islands for the primates, and creating roads. Buildings were erected as funds became available. The first animals started to arrive in late 1982, and the Park opened in summer 1983. By December 2004, the Park had welcomed over four million visitors.

Fota Island was the former home of the Smith-Barry family, descendants of Phillip de Barry who came to Ireland from Wales with the Norman invasion. He was granted Fota and other lands in 1185. The family first resided at Barryscourt Castle, Carrigtwohill, then at Castlelyons where they held extensive lands. Fota House was originally a hunting lodge and became the family’s main residence in the 1820s when the architect, Sir Richard Morrison, created the present regency mansion. The estate was sold to University College Cork in 1975. Fota House is managed by Fota Trust Ltd. and the gardens and arboretum are managed by the Office of Public Works. The rest of the island is owned by the Fleming Group and includes a championship standard golf course. The Irish Open was held in Fota in 2001 and 2002.