You are here: Home / featured / Three news schools to open in September 2019 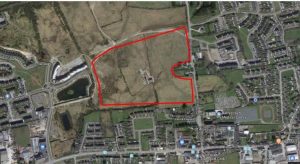 Mr. Ted Owens, CEO of Cork ETB came to Carrigtwohill this week to brief parents on the status of the proposed new schools in Carrigtwohill. Apparently half of the site has been purchased by the Department of Education and the other half is in the final stages of purchase.
Planning should be applied for in early 2018 with a planned opening date for all three schools being September 2019.
The map is an indication of the site for the three news schools, Carrigtwohill Community College, Scoil Chliodhna and Scoil Mhuire Naofa (apparently Scoil Chlochair Mhuire declined to get involved in the new national school) and looks to be almost double the previously published site.
The campus will have a loop road through it with two entrances on Station Road, one at the Pearse Place end and the other somewhere near the Cul Ard entrance.
The question of the link road from Station Road to Castle Lake is a matter for the County Council and we can only hope that is provided in the same time frame as the schools. One hates to think what Spratt’s/Guilders corner would be like if it had to accommodate school traffic even without the proposed quarry traffic.