The Name Carrigtwohill
Carrigtwohill, in Gaeilge “Carraig Tuatail” meaning “a rock worked leftwards”, “to the north or wrong direction”, “opposite direction to that of the sun’s course”, “in a bungling fashion”. In his book “Church and Parish Records”, 1903, the Rev. J.H. Cole of the Church of Ireland says “Carrigtwohill” is derived from “Thuahill”, “left handed”. Also meaning “North” that is “left handed” ( or “reverse”, or “North”, so called because whereas – all the rocks in that part of the country run East and West, the rock at this place is an exception and runs North and South”. The Irish named the Cardinal Points with relation to a person facing the rising sun – thus “Thuahill” was north “on the left hand” 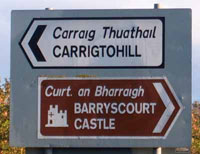 This huge rock from which Carrigtwohill derives its place name is about half a mile north-eastwards from the village itself, and is in the townland of Carrigane. The rock is honeycombed with caves; some are very large and travelling for miles underground, where very beautiful stalactites are to be found. Tradition is current that a goat at one time entering these caves emerged of the townland of Ballintubber, a few miles southwards. The cave where this goat emerged is today called “poll an Gabair”, that is “The Goat’s Hole”.

In page eighty from “Seventy Years of Irish Life” by W.R. Le Fanu, can be found “A poor Italian organ grinder, weary after the long walk, asked a peasant whom he met near Carrigtwohill how far was he from Cork. “Just four short miles” was the answer. “What do you mean” said Father Rufus who happened to pass at the time “by deceiving the poor fellow? You know well enough it’s eight long miles”. “Sur your Raverance”, said the other, “ I seen the poor boy was tired and I wanted to keep his courage up. If he heard your Raverance – but I’m pleased to think he didn’t – he’d be downheated entirely”.

And in page one-hundred-and-eighty-two of the same book appears, “At Carrigtwohill”, which I mentioned just now, I got a curious answer. It often is hard to get from a peasant the meaning of the Irish name of a place. This probably arises from the name having been a good deal changed from what it originally had been. I asked a country fellow, “What is the English of Carrigtwohill?” “I never heard any English or Irish name upon it, only Carrigtwohill alone” said he. “I know” said I, “it has no other name, but I want to know the meaning of the name”. “Well now, your hounour, it’s what I can’t tell you why it’s called Carrigtwohill”. 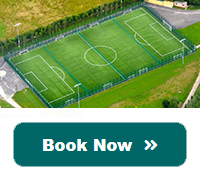 This website uses cookies to improve your experience while you navigate through the website. Out of these, the cookies that are categorized as necessary are stored on your browser as they are essential for the working of basic functionalities of the website. We also use third-party cookies that help us analyze and understand how you use this website. These cookies will be stored in your browser only with your consent. You also have the option to opt-out of these cookies. But opting out of some of these cookies may affect your browsing experience.
Necessary Always Enabled
Necessary cookies are absolutely essential for the website to function properly. This category only includes cookies that ensures basic functionalities and security features of the website. These cookies do not store any personal information.
Non-necessary
Any cookies that may not be particularly necessary for the website to function and is used specifically to collect user personal data via analytics, ads, other embedded contents are termed as non-necessary cookies. It is mandatory to procure user consent prior to running these cookies on your website.
SAVE & ACCEPT
Go to Top